Headshrinkers of the Amazon, directed by Osca Humphreys, is all about the Shuar people of Ecuador. The story is kickstarted by the discovery of a recording shot by an explorer in the 1960’s, showing what looks like the only known footage of a genuine headshrinking ceremony. In it, a real human head is shrunk to the size of an orange.

Embarking on an intrepid voyage to investigate the footage and its legitimacy, Piers encounters the President of the Shuar, a battalion of jungle fighting specialists, a Catholic missionary who campaigns against headshrinking by converting the Shuar to Christianity and a member of a lynch mob who chats happily about the day he dragged someone off into the jungle and “turned him into powder”. . .

Headshrinkers of The Amazon first aired in the UK on 2009 on Channel Five, and is now viewable on National Geographic Channel worldwide. Some of the highlights can be viewed below:

Immerse yourself in the adventure by having a look at our gallery of images from Headshrinkers of the Amazon in tropical Ecuador.

Headshrinkers of the Amazon was received and reviewed very well by both viewers and critics alike. It even attracted the attention of the Jay Leno show, as well as The Guardian, The Times, The Mail and The Sunday Times. Piers Gibbon and director Osca Humphreys were interviewed about filming the show on both Real Radio and Radio London.

“Sensibly packing a selection of hats and arming himself with self-deprecating jokes, Piers Gibbon ventures into the Ecuadorian jungle.”What's On TV

“It’s a shame this wonderful documentary… is only an hour long.”The guardian

“Thought-provoking… well worth a look.”Teletext 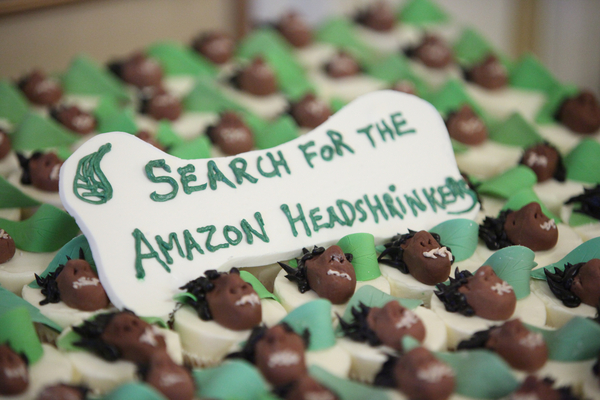 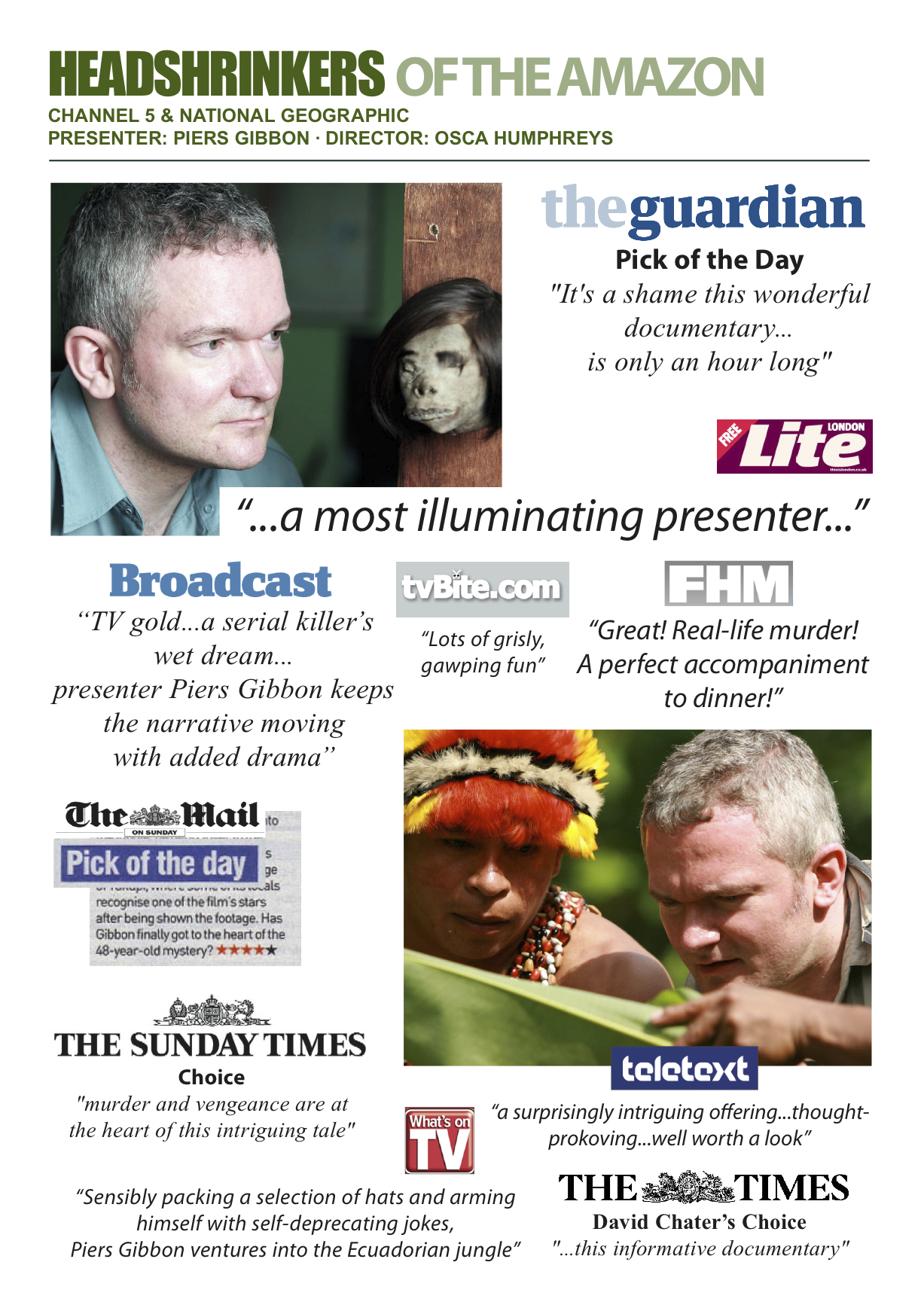 Q: My family watched an episode of your Amazon show. After watching it, we then realized that we have one of those shrunken heads. My grandfather was in the military and was in Ecuador in 1960s & that is where he got it. Where can we take it to see how much it is worth?

A: Thanks for watching Headshrinkers. I live in London so I don’t know of any head dealers in your part of the world. Actually I don’t know any head dealers anywhere! There was some new piece of legislation in the UK that meant trading in (even ancient) human body parts became a lot more complicated recently. I do remember hearing about someone who sold a shrunken head fairly recently in the USA so presumably it is still legal there.

Good luck with your search – and look out for Dining With Cannibals on NatGeo soon.

If you would like to know more about the Shaur people and their practise of headshrinking, there is much more information to be found here! Watch a reconstruction of the fascinating Shuar headshrinking methods, or read the article below from The Saturday Evening Post, 1958, about Dr Ferguson, whom the film Medicine Man is based upon. Dr Ferguson was searching for the active ingredient in his anticancer formula, Amitosin. The ingredient is found in plants used for headshrinking. Ferguson himself had to shrink a head to be accepted by the head-hunters. 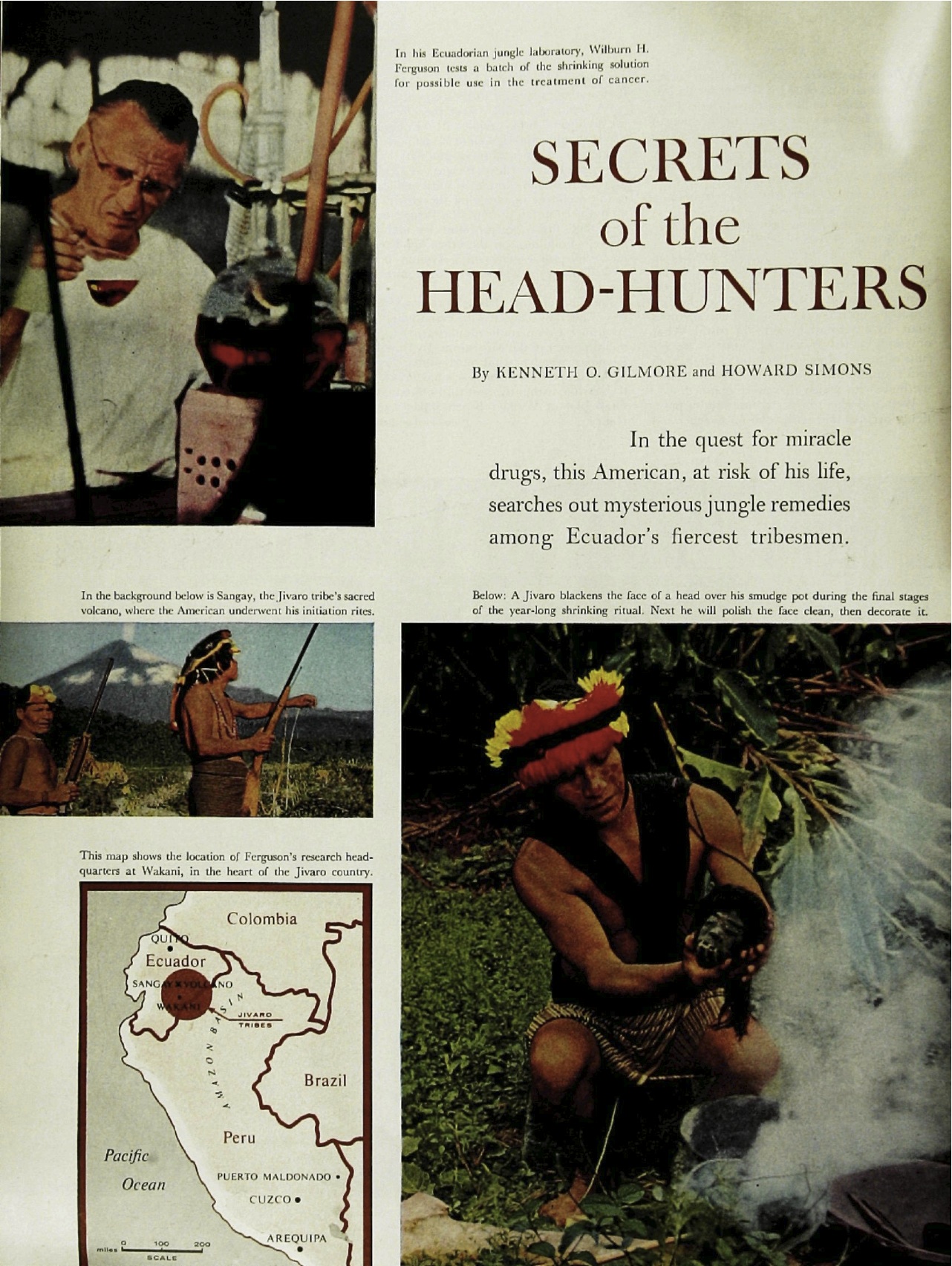 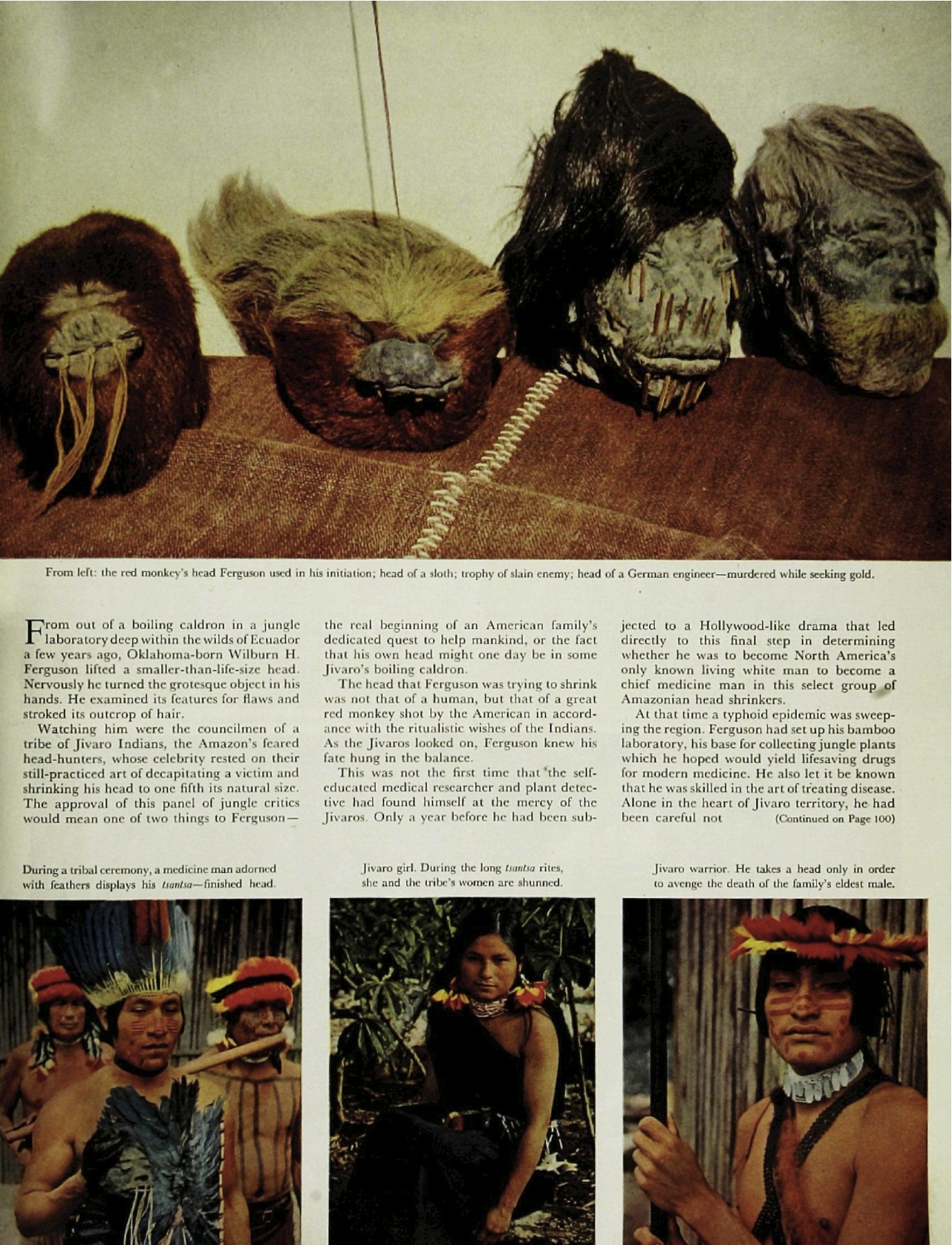 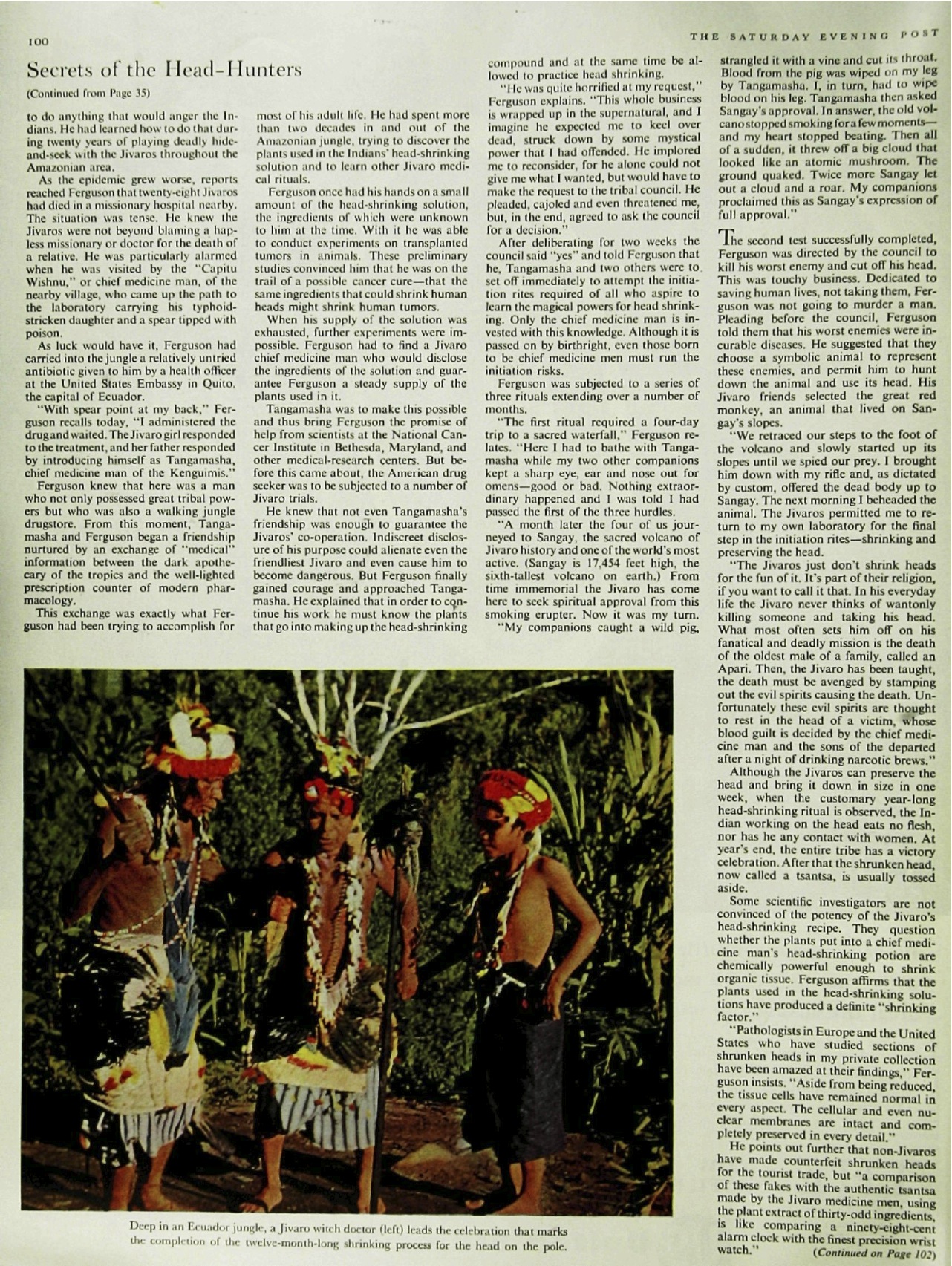 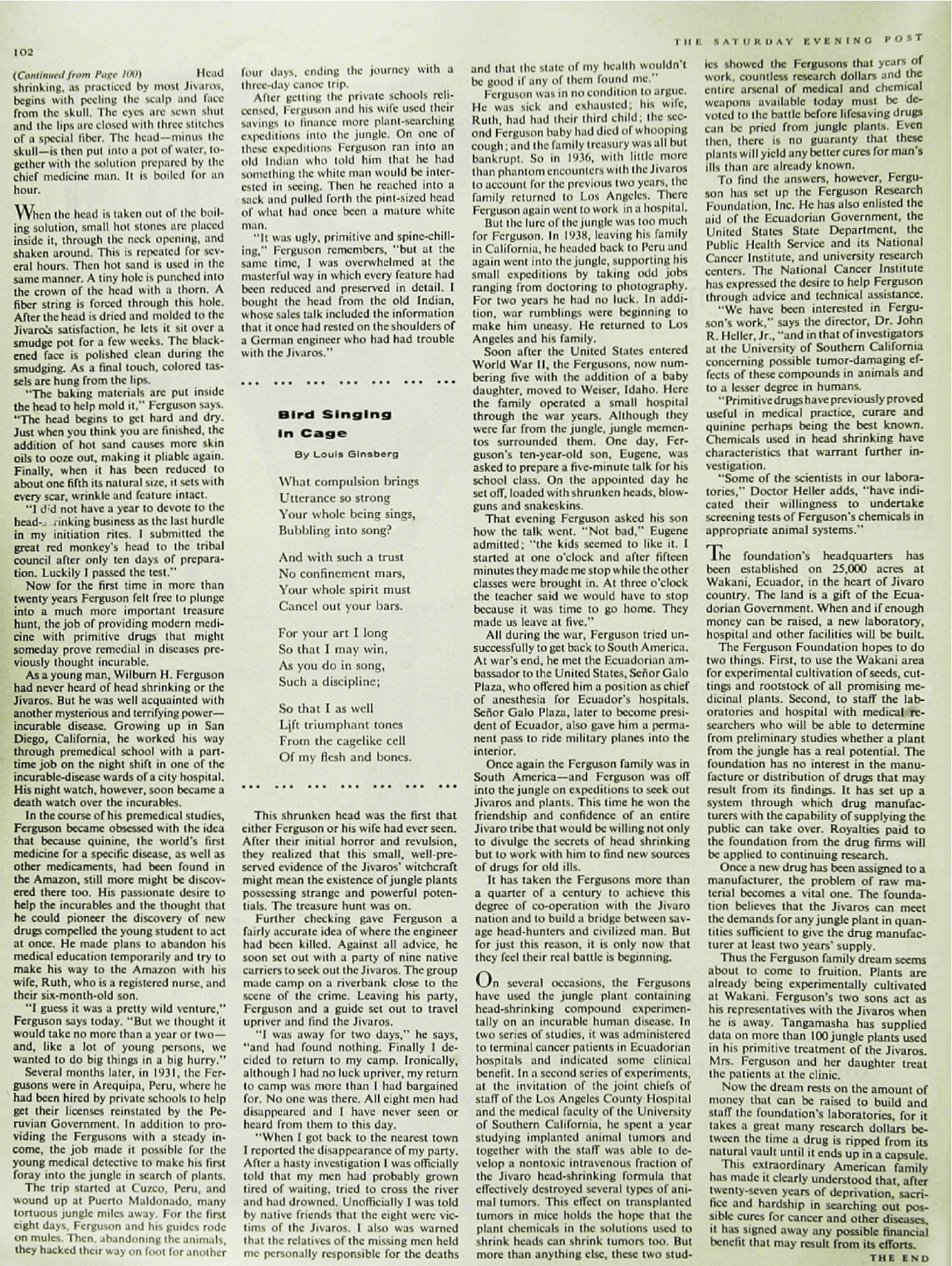