A couple of days ago, I was writing in this column about the disturbing effects that vast quantities of cannabis can have on the mental health of a human being. Having watched Unthinkable: Jungle Trip (Sci-Fi channel), I have come to the conclusion that there are even worse things that could catch on in the modern world.

Would you believe that in the forests that surround the Peruvian stretch of the Amazon river there are plants that talk to humans? I know that Prince Charles and one or two of his close friends talk to plants, but surely no one could believe that they actually talk back?

Piers Gibbon did. In fact, he was convinced of it. To his great credit, Piers cut rather a sympathetic figure as he set out on the first part of his odyssey to Kew Gardens. This was, it could not be denied, the easy part of the journey, but Piers was intent in presenting his credentials in the most austere light. He was no cheap seeker of cheap thrills.

He admitted to many experiments with hallucinogenic flora, but insisted that this was all in the cause of solving a conundrum which dominated his waking hours: he knew beyond doubt that plants spoke, it was just that he did not understand their particular dialect. And just to show that he had one foot in the real world, Piers admitted that he also wanted his name to be given to the rare plant that he was determined to bring back to Kew from those Peruvian forests. You’d have thought that a chap called Gibbon might have been a fauna man, but there you go. 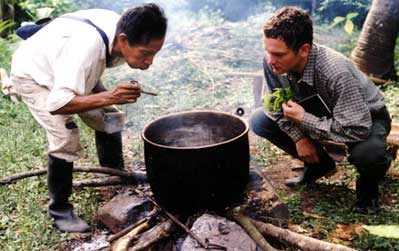 The rite stuff: But Piers Gibbon could have achieved the same effect with 10 pints of beer

It was at this point that this edition of Unthinkable became less a physical journey and more a metaphysical voyage into one of those hearts of darkness that we know lurk in the jungle, ready to consume Western man with its strange and potent spells. The camerawork was rudimentary, but this could have been a knowing nod to such low-budget movies as the Blair Witch Project.

As he drew near what he hoped would be, if not nirvana, then a source of some enlightenment, Piers began to get excited. He was talking of shamans. I was reminded of a time long ago when a chap in the next room to me at university would shoot out of his door every now and then to announce that Carlos Castaneda had seen the light and we must all go immediately to Mexico and eat cacti.

Piers’s search for a shaman led him directly to a bloke called Alan who was, needless to say, American. Alan explained to Piers in a somewhat self-important manner that the most important factor in what they were about to experience was to get rid of the ego.

He then added in a casual aside that there might also be some other business that involved getting buttnaked and being spanked with bunches of nettles. Had I been present at this exchange, I would have strongly advised Piers to call the whole thing off on the spot.

For what he was about to undergo was an Olympic trial in puking – shamans are skilled at one thing and one thing only: boiling up disgusting potions, mumbling a few platitudes about the purging of the body and then watching as everyone-throws up at once. Alan also had a neat little chaser to this routine which involved injecting thick, black tobacco juice up his victims’ noses. Then they got naked and were spanked by nettles.

Piers Gibbon, it has to be admitted, was made of stern stuff. Deciding that Alan was essentially a lightweight, he sought out Richard, who helped him find David, who had gone native. The natives to whom David had gone believed that true enlightenment could only be achieved by rubbing frog poison into the holes in the flesh caused by the ends of red-hot sticks. Immediately after submitting to this procedure, Piers found himself down on his knees puking up once again.

No one had the good sense to tell Piers that he could have achieved the same effect at home by drinking 10 pints of beer and a bottle of creme de menthe, but perhaps I was missing the point.

By the time we said goodbye to Piers, I felt he had gone completely off his rocker. Through the good graces of an anthropologist called Francoise, he had met a really out-there shaman called Don Demetrio, who made Piers spend days on end in the jungle on his own, taking vile potions and being sick. Piers claimed that he was beginning to reach some degree of enlightenment. I felt he was probably suffering from lack of sleep and malnutrition. When Don Demetrio regurgitated what looked like a worm from his stomach and got Piers to eat it, I decided that they deserved each other.

One positive result of the trip – and for all I know, Piers is still there – was that he found the plant he wanted to give to Kew Gardens and had it sent there, where it would, he hoped, one day bear his moniker.

Unfortunately the plant was destroyed on arrival due to lack of verification. That said it all.

This site uses Akismet to reduce spam. Learn how your comment data is processed.